Book Recommendation: What Happens When We Worship

Scott Aniol
Every so often a book warrants the thought in my mind, “I wish I would… [more]

David de Bruyn
How is Christian imagination shaped? A true but not very helpful answer would be to… [more]

Michael Riley
In a couple of weeks, I’m scheduled to head down to Illinois to attend… [more]

The Work of the People 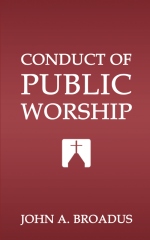 Originally published as part of his Treatise on the Preparation and Delivery of Sermons, this short discourse by Baptist leader John A. Broadus provides helpful exploration of issues related to thoughtful, deliberate, and biblical public worship. Topics surveyed include Reading of Scripture, Hymns, Public Prayer, Length of Services, and Pulpit Decorum.

John Albert Broadus (1827–1895) was an American Baptist pastor and professor at the Southern Baptist Theological Seminary, one of the most famous preachers of his day. Charles Spurgeon deemed Broadus the “greatest of living preachers.” Church historian Albert Henry Newman later said “perhaps the greatest man the Baptists have produced.”